The company is developing cell and battery technologies specific to tropical conditions. 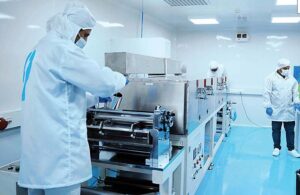 The company is developing cell and battery technologies specific to tropical conditions.

And it has established a pilot plant in Bengaluru.

“We are a deep-tech nanotechnology company, developing cell and battery technologies ground-up in India, specific to tropical world conditions,” says Akshay Singhal, co-founder and CEO. Singhal and co-founder Kartik Hajela started the company in 2015 out of IIT-Roorkee. “Our cell fabrication facility is being commissioned as we speak, and it is going to be the largest in India and Southeast Asia,” he says.

The next step is to make the cell itself in-house.

“When we started, we could have borrowed technology, but we chose to work on a blank canvas and we have finally made our mark,” says Kartik Hajela, co-founder and COO. Hajela points out that India needs bespoke products made to suit its own conditions. For example, Log9 claims its EV batteries in India charge nine times faster and last as many times longer in comparison with competitors.

With its new cell manufacturing factory, Log9 is aiming to achieve 50-100MWh of cell production capacity—roughly enough for making battery packs for 1,500 to 2,000 two-wheelers every month—and then scale it up to 5GWh in the next three to five years. Log9 is investing about $20 million in the plant, and Singhal expects to “keep augmenting” the infrastructure.

In addition to manufacturing, Log9 has also invested in, and partnered a cell-recycling startup, which Singhal didn’t name.

Battery and battery cell recycling will also be a critical component of the overall push towards self-reliance in EV batteries  in India.

Other ventures such as Lohum Cleantech in Delhi, for example, are also establishing the recycling ecosystem in India.

Log9 is also working on developing aluminium fuel cells, which could eventually be used for long-haul applications.