The EV expert committee was appointed to probe the manufacture of EV two-wheelers following a series of fire incidents, earlier this year.

Considering the serious EV fire incidents, Ministry of Road Transport and Highways (MoRTH), India had appointed an EV expert committee that has flagged serious lapses in the battery management system (BMS) and venting mechanism of cells used in electric two-wheelers. 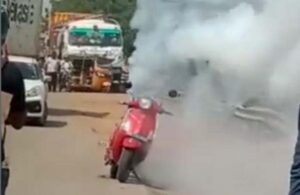 The EV expert committee was appointed to probe the manufacture of EV two-wheelers following a series of fire incidents, earlier this year.

Based on the EV expert committee recommendations, the Transport Ministry has decided to impose heavy penalties on three EV makers, who were found guilty of selling faulty vehicles, the report added.

One of the first EV fire incident videos to have gone viral showed an electric scooter first emitting smoke before quickly being engulfed in flames on a busy street. It was followed by another e-bike that went up in flames because of a short circuit mishap in Vellore, Tamil Nadu.

Following the fire incidents, Transport Minister Nitin Gadkari warned EV companies of heavy penalties and mandate recalls if they were found guilty of negligence. “Several mishaps involving electric two-wheelers have come to light in the last two months. If any company is found negligent in their processes, a heavy penalty will be imposed and a recall of all defective vehicles will also be ordered,” Gadkari said in a tweet.

Gadkari urged EV manufacturers to take proactive action in the matter, underlining that the government is committed to ensuring the safety of commuters.

The Transport Ministry will soon be issuing regulations to ensure safety standards in batteries, the report added.

It was also reported that the safety standards will mandate the manufacturers to come up with an “auto cutoff” feature.