ProLogium is one of several startups working on solid-state battery technology, which could significantly reduce EV production costs.

Vietnamese automaker VinFast has joined forces with Taiwanese battery startup ProLogium for EV batteries for delivery as early as 2024. 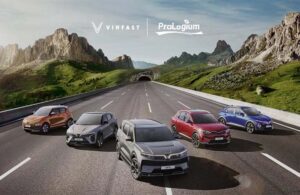 It also signed a memorandum of understanding with ProLogium for EV batteries for its next-generation vehicles, VinFast said.

“VinFast has focused on investing and building strategic partnerships with leading companies in the industry and breakthrough technology companies,” said Le Thi Thu Thuy, VinFast Global CEO. “ProLogium is one of our key partners, helping VinFast quickly master the supply of solid-state batteries.”

ProLogium for EV batteries is known to provide higher energy density and faster charging than conventional batteries, which use a liquid electrolyte rather than a solid material.

“We are a major innovator in battery technology with already proven manufacturing capabilities and we aim to become the main driver for a sustainable world through high performance, safe and affordable technologies,” said ProLogium CEO Vincent Yang in the news release.

ProLogium is one of several startups working on solid-state battery technology, which could significantly reduce EV production costs. They include Colorado-based Solid Power with investment from Ford and BMW, and California-based QuantumScape backed by Volkswagen Group.

“ProLogium plans to provide solid-state battery cells to VinFast starting from 2024 to support its next-generation lineup,” VinFast said. “ProLogium’s first major solid state battery plant, which is slated to launch in early 2023, will devote a significant portion of the facility’s production capacity to supply VinFast.”

The automaker said it may also establish a joint venture with ProLogium for a battery factory in Vietnam.

VinFast is a new automaker that began producing combustion-engine vehicles for its home market in 2019 based on technology from BMW. The automaker is phasing out combustion engines in favor of newly developed EVs as it expands to global markets, starting with the U.S., Canada and Europe.

VinFast is taking orders on its midsize VF 8 and VF 9 crossovers, with expected deliveries by the end of the year. VinFast delivered its first EV in Vietnam in December.

VinFast is searching for a location to build an electric-vehicle plant in Germany. The factory would build electric cars and buses, the automaker said in January.

The company did not give a target date for when the factory would open.