Svolt's new battery technology has passed its torture chamber tests with flying colors, including the nail puncture and thermal runaway ones. 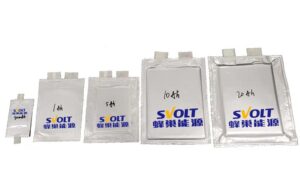 According to Svolt Energy, the pack is the first all solid-state sulfide battery cell in the 20 Ah class that will allow electric vehicles equipped with its cells to run 1000km (620+ miles) on a charge.

The advantages of a solid-state battery cell are numerous, but chief among them is the cell’s endurance.

Svolt says the new solid-state battery cell technology has passed its torture chamber tests with flying colors, including the nail puncture and thermal runaway ones. The hot-box test was done at 200 degrees Celsius (392 degrees Fahrenheit).

For comparison, the first cars with a battery that has a solid electrolyte diaphragm, what its maker Ganfeng Lithium calls a semi-solid state cell, have had their units pass a 180 degrees Celsius (365 degrees Fahrenheit) hot-box test.

The hard-to-master sulfide material technology has been developed by Svolt in-house, and now the battery researchers have patents on both solid electrolyte and diaphragm production, for a solid-state battery cell.

CATL believed that solid-state batteries won’t be mass-produced before 2030, but recent advancements by smaller and nimbler competitors may force it to reconsider that timeframe.

When NIO turned to CATL with an offer to scale a 150 kWh solid-liquid hybrid battery pack that will allow the top version of its ET7 performance sedan to surpass the 620-mile range threshold on a charge, CATL balked at the prospect, saying it barely has the resources to scale existing technologies with numerous clients knocking on its door.

NIO then went to WeLion and developed the semi-solid battery for the ET5 and ET7 sedans with the startup, forcing CATL to reconsider its decision and invest into high-nickel battery development.

There are now other companies like Gotion that are ready for pilot mass production of solid-liquid hybrid batteries as soon as this year.