This is the first time in a very long time that another EV manufacturer has managed to dethrone Hero Electric from the top position.

Reversing the results of August sales where Hero Electric had a clear edge over the next bestselling EV maker, Okinawa, a role reversal was witnessed as Ola Electric and Okinawa have topped the two-wheeler sales registrations charts. 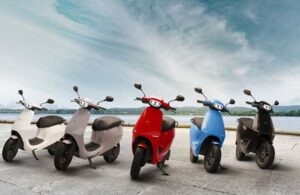 This is the first time in a very long time that another EV manufacturer has managed to dethrone Hero Electric from the top position.

Ola Electric has bounced back from its relatively paltry sales figure of 3,421 units in August to 9,634 units in September. The launch of the more affordable S1 e-scooter coupled with the discount it has been offering no doubt helped the company achieve these numbers.

Okinawa, despite registering 8,278 units, which is less than August’s figure of 8,554 units, managed to edge out Hero Electric to become the second bestselling EV manufacturer in September. Meanwhile, Hero Electric saw a sharp 23.46 percent decline in month-on-month sales, down from its 10,476-strong figure in August to 8,018 units last month.

Ather has been growing its sales numbers steadily, but despite racking up its best-ever monthly sales of 6,164 units, it is still the fifth in terms of two-wheeler EV sales. Ather’s growth can be attributed to the introduction of its Gen 3 450X e-scooter, which now has a range of more than 100km on a single charge, as well as the brand’s scaling up of its production capacity.

The TVS iQube, which saw a growth spurt in August (4,418 units), saw a marginal decline last month and was able to only manage 3,931 registrations. The Bajaj Chetak saw an increase in its sales with 3,202 units sold in September, up from 2,687 units sold in August.

The leading electric motorcycle manufacturer, Revolt, again saw a decline and dipped below the thousand-unit mark last month at only 837 units. Pure EV also saw a monthly decline and was only able to rack up 751 registrations as compared to 875 in August.

The other electric motorcycle maker, Tork, too saw a dip in sales from 60 units in August to 48 in September. Bounce, however, was able to register a marginal growth, up from 580 to 629 units last month.