The cities to get dealerships include Hyderabad, Delhi, Lucknow, Cochin, and Thane. 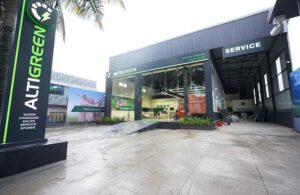 The dealership is spread over more than 5,000 square feet.

The Bengaluru-based company says it is constantly ramping up its capabilities through innovation and has expansion plans to widen its pan-India presence and cater to the rising demand. By FY23, the EV company plans to open 40 stores in 40 cities.

The cities to get dealerships include Hyderabad, Delhi, Lucknow, Cochin, and Thane.

“In the B2B segment, the company is well-positioned to cater to the needs of large institutional customers and intends to take leadership positions. It is important to cater to the market load operators or the B2C segment, which contributes up to 80 percent of the overall market. The first retail dealership in Bengaluru is the start of our journey in establishing a national footprint. Going forward, we will continue to deliver the most advanced EVs best-suited for Indian cargo and passenger mobility needs,” said Amitabh Saran, founder and CEO, Altigreen.

The company’s commercial electric 3W offering, neEV comes in three models and has recently achieved the feat of completing more than 150 km of intercity drive on a single charge in about six hours.

Additionally, the company announced a partnership to launch the fastest-charging three-wheeler while offering over 100 chargers in Bengaluru itself, said the release.

“The concern for the environment has led people to increase their interest in electric vehicles. Not only this, but the cost of fuel can also decrease substantially as all it needs are a few units of electricity. According to recent reports, the electric vehicle market will be worth ₹47,500 crores by 2025. I congratulate Altigreen for opening its first dealership in the city. “said CN Ashwath Narayan, Karnataka Minister for Higher Education, IT-BT, Science & Technology, and Skill Development.